The Night Before Slugfest by Amy Handelsman 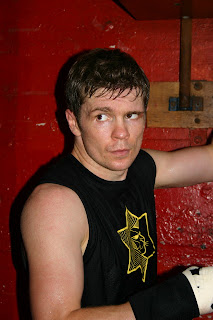 Friday night. Shabbos. I decide to attend services in the place where Yuri Foreman and his wife pray. There is construction near the building, so they will be held at the home of Rabbi Dov Ber Pinson, followed by the traditional Sabbath meal. I am a little shy about going—I won’t know anyone, and I even doubt Yuri will be present—but I remember how welcoming Orthodox Jews have been to me when I’ve shown up unaffiliated.

The Rabbi gives a talk after dinner on the Parsha of the week, Sh’lach. Moses sends 12 spies from the desert into the land of Canaan—a land supposedly flowing with milk and honey. The Rabbi says that Moses and G-d had an argument before sending out the spies; G-d wanted women sent; Moses wanted men. G-d let Moses have his way, knowing the outcome would not be as good. Indeed, 10 men came back and said that they came upon giants and were as grasshoppers, indicating a vast inferiority complex. Only two spies saw the possibilities. And this tells us that we see things not as they are, but as we are. I am reminded of the work of Einstein and the physicists who say that the act of observing changes the observed.

We learn that there are two ways of acquiring the land—through vision, and through conquering. We could not achieve the good by vision; our vision was distorted. It was left to Joshua to acquire the land through acts of conquering.

There were many friends of Yuri’s at the Shabbos dinner. None had been to a prize fight and many would be setting out, like Yuri, 18 minutes after the sun sets to trek to Yankee Stadium for the battle. But Yuri is being given an NYPD escort for a seamless delivery (and a delivery in style) to the stadium.

The Rabbi also talked about words trumping thoughts and actions trumping words.
Posted by Hank Kaplan Archive at 7:36 AM