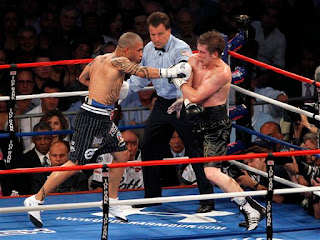 I arrive early to the Stadium, a little too sparkling clean for my tastes. In the spirit of hospitality (inviting folks to the South Bronx who might ordinarily resist), the Yankee Stadium employees hold up paddles that say, “How may I help you?” This seems a bit too friendly, un-Bronx like—the opposite of my experience at the old venue, when, asking for directions to the D train, a native trumpeted, “The D? The D? You don’t want the D. The D?? What are you--outta your mind?”

With seven fights on the undercard, there are not many people yet in the stands. Banners along the top spell out, “Mazel Tov, Scott,” evidence of the Ballan Bar Mitzvah that had been booked before the fight (and which Top Rank promoter Bob Arum successfully negotiated around, inviting all the guests to attend that evening’s bouts).

Most of the patrons are Cotto fans and wear some symbol of Puerto Rican nationalism. The Orthodox Jewish contingent will show up long after dark.

I worry about the clear ethnic rivalry between these two groups, and how, in a testosterone-filled event, there might be roving groups of guys, spoiling for their own fight. Freddy Colon, a security guard in a pale blue polo shirt, assures me that there was no special training given to handle the crowds, but admitted that there were close to 100 cops hired to help.

I thread between the Mohegan Sun Press Room and the Monument Park Concourse where fans are starting to stream in. There are some decent fights on the undercard in the lighter weight classes; the female referee Sparkle Lee is in the ring. I’m glad they’ve got a woman in there, but her constant movement makes me think she’s not secure in the position. Maybe it’s a style thing.

Styles make the fight, they say. We’ll see how trainer Manny Steward has tweaked that of his boxer, Miguel Cotto. Cotto has taken a beating from the last two fights—against Manny Pacquaio (some say the greatest pound-for-pound fighter of today) and against Antonio Margarito.

Meanwhile, the styles of the Latinas entering the stadium are fierce, girls poured into dresses with backs cut out in strips, tottering on platform gladiator sandals, hips swaying. I admire their moxie. The men are likewise baroque; they sport fancy shaved buzz cuts, elaborate crucifixes nestled against their Cotto T-shirts, the bling of a martyred challenger with a chance of redemption.

I ask the guy at the concession stand why there are only Cotto posters for sale. He turns over the stack—Yuri Foreman’s image is on the flip side. “Have there been any Foreman fans?” “Quite a few,” he says. “The bandanas are all sold out.” It is then I start to notice them, Jewish-American kids from Westchester and Long Island, in T-shirts that say “Advantage, Federer.” One wears a map of Israel with the inscription, “Let My People Stay.” These guys look like they might never have been to a prizefight. Next come some Israeli paratroopers, in considerably better shape.

It’s more than 18 minutes after sundown (when the Sabbath officially ends), and Yuri has been whisked by police escort from the east side of Manhattan up to the Bronx. He won’t have much time to warm up and get his hands wrapped, and that worries me, too. Meanwhile, the last four fights have gotten better, gone the distance in unanimous decisions.

The Orthodox are streaming through Gate 8. It’s easy to distinguish the Modern Orthodox from the Chassids, the first in baseball caps or neat kippahs; the second, in black hats or fedoras, tallit hanging under their shirts. There’s a long line at the kosher food stand near the entrance. They look a bit stunned to be there, giddy that their boy made good. A fighter and an aspiring rabbi—how much better can you get? Talk about redemption…

The final bout on the undercard is in the ring, for the NABF & NABO Super Welterweight titles: Joe Greene from New York, NY v. Vanes Martirosyan from Glendale, CA. They’re both good fighters, but my money is with the Armenian kid from Cali—he’s got Freddie Roach in his corner.

I stand next to big guy in a Mets uniform at Gate 8. I joke that he can’t wear that outfit in Yankee stadium. He tells me he’s not afraid. I say, “It’s just not right. When in Rome…” He tells me he can’t talk to me—I’m a Yankee fan. Next to him is a cop. Usually they’re in pairs. It occurs to me that the Mets guy may be a cop, too. I ask, “Are you undercover?” He says, “I can’t answer that.”

The city is doing everything it can to prevent what happened at the last Yankee Stadium bout 34 years ago, when Ali defended his title against Norton. The cops were on strike and roaming gangs went wilding. Despite an advance sale of some 30,000, only eight seats were sold at the gate.

There’s a bit of hysteria in the air now—a buzz from hype, adrenaline, and temptations of the flesh—liquor, blood, the potential for sex. A fight breaks out in front of me—two large black guys who could be football players in their size and grace. One has spilled the other’s beer. They are yelling, then suddenly freeze, touch fists and embrace. Meanwhile, a jostled sanitation worker calls out, “What the hell are you bumping into me for?”

I pass the concession stand—the Yuri Foreman posters are now right-side-up, next to the Miguel Cotto ones.

What looks to be former Yankee David Wells appears in a Red Sox uniform. He’s roundly booed and waves it off.

Vanes Martirosyan beats Joe Greene in a 10-round unanimous decision.


The Lead-in to the Fight

Cotto, the challenger, enters first to salsa music, wearing Ecko, his face solemn. He looks like he’s walking to his execution, his hand resting on the shoulder of his young son. He lost his beloved father in January. When asked about it, the boxer gets both wistful and defensive, saying his father’s never left him, he’s always there.

Foreman arrives to the call of the shofar, grinning, and to the singing voice of the Lubavitcher Rebbe Schneerson. I think about the Jewish boxers that went before him: Benny Leonard, Barney Ross, Lew Tendler, Kid Berg, Maxie Rosenbloom. Such was their popularity that Max Baer, who was assumed to be Jewish because of his name, never disputed it.

Spike Lee sits next to Ray Mancini at ringside. The Puerto Ricans in the pressroom join in with Frankie Negron to sing their national anthem. Shalva Berti croons a mournful HaTikvah (“The Hope”), and I think about the public relations disaster of the Israeli raid on the Turkish flotilla this week. A 16-year-old Andrea Rosario delivers our “Star-Spangled Banner” to the troops overseas. Michael Buffer invites us to rumble.

Cotto clearly takes the first two rounds. He looks crisp, better balanced. He’s working his jab and double-jab. He’s not as fast as the elusive Foreman, but his timing is right. Steward did say that Cotto was a very willing student. In the second, Cotto knocks Yuri with a huge right hand. Yuri finally connects. He can control the tempo of the fight if he stays outside, but he’s no match-up for Cotto’s power.

The third round is up for grabs, most likely Cotto’s. Strangely, Cotto looks faster than Foreman; Foreman is slow to warm up. Cotto is also protecting against Forman’s jab by keeping his left hand high.

Foreman rocks Cotto with a right hand in the fourth. One of the announcers says, “Speed could be power.” The other, “Well, it is that.” Another right from Foreman.
He has to be careful he doesn’t leave himself open to Cotto’s deadly left hook. Foreman feints with the left and lands the right. Foreman slips in this round, but he’s shown more aggression and likely wins it.

In the fifth, Cotto looks sharp. Whoever said he was worn out from the recent losses didn’t count on this. Foreman is quicker, Cotto landing harder punches, and a fierce uppercut. (“You’d think he was Mexican.”) It’s a pivotal round—too close to call.

In the seventh, an announcer says that it looks like this fight might go to decision. It may be up to “who can make the other guy change.” Styles make the fight. Foreman’s right knee suddenly buckles—he goes down at a weird angle. He gets up, falls again. Mercante wants to call in the doctor; Foreman shakes it off. But it’s clear that he can’t pivot on his right, can’t even put much weight on it. For a boxer who relies on his speed and mobility, it’s questionable how long he can continue.

Foreman answers the bell for the eighth round and it seems foolish. He can barely move. We see Foreman’s beautiful wife Leyla Leidekcer (a model and fellow boxer) entreat Joe Grier, Foreman’s main second. From his corner, a white towel is thrown; it hits Cotto on the shoulder. Everyone assumes the fight is over—the white towel being a universal sign of surrender. But as corner men and press pour into the ring, Mercante throws the towel back out; he consults with Foreman, orders everyone to leave. Astonishingly, the fight continues after a 2:57-minute delay. Less than a minute to go in the round, Cotto holds back and Foreman is all heart.

The pressroom is electric with disbelief: Why didn’t Mercante stop the fight, either accepting the trainer’s surrender, or protecting a fighter who couldn’t be relied on to protect himself?

In 0:42 seconds of Round 9, Cotto delivers a left hook to Foreman’s body. Foreman crumbles and the fight is mercifully stopped.

Bob Arum addresses the crowd as a hungry press awaits the boxers. He thanks his partners at Yankee Stadium, thanks the 20,2072 attendees, thanks the weather for “cooperating.” Bobbing and weaving, Arum not so deftly addresses the question of the thrown towel. “Who threw it? I don’t know. But it didn’t come from the fighter’s corner!”

Arum commends Foreman’s heart but says, had the fight gone to decision, it most likely would have been Cotto’s. What’s next? That depends if Pacquaio v. Mayweather comes together. And it should. The issue of drug testing is off the table.

The first fighter out is Vanes “Nightmare” Martirosyan, along with trainer Freddie Roach. Martirosyan tells us he enjoys the boos from the crowd—that’s what you hear coming up from the amateurs.

Cotto follows. He’s still not smiling. Cotto manages to appear both humble and arrogant. He says he’s donating his shoes from the fight to the Baseball Hall of Fame. Arum gamely holds up one shoe, asking, “So, where’s the other?”

Foreman is all sheepish grins. It’s impossible not to like this guy. He tells us that he saw the towel being thrown—“it was a lot of commotion”—but when Mercante asked if he wanted to continue, he answered, “Of course.” He slipped not because there was a wet spot, but because the lateral movement put a strain on an old bicycle injury. He was just 15, and the family was too poor for medical insurance. An ESPN reporter asks Foreman if he thinks it’s a torn ligament. Arum pipes in, “That’s a stupid question.” The reporter shouts back, “It’s not a stupid question, Bob! It’s not a stupid question!”

Joe Grier, Foreman’s main trainer, has the last word. Grier did throw in the towel; he did it after not being able to get the referee’s attention. His fighter showed a lot of heart but started getting hit by shots. “I wanted him to leave with some dignity.”