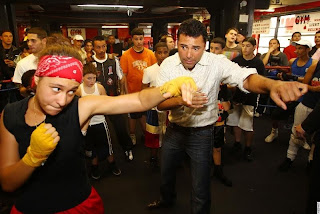 In a sweltering Gleason’s Gym on Tuesday, September 28, 2010, Oscar “Golden Boy” de la Hoya “put in an extra punch to the great borough of Brooklyn” in a celebration of his recent three-year deal with Brooklyn Sports & Entertainment to bring a yearly minimum of 12 bouts to The Barclays Center, future home to the New York Nets, among other sports franchises, at the former Atlantic Navy Yards.

De la Hoya, retired boxing champion and now founder and President of Golden Boy Promotions, was ringed by some of his more prominent fighters, among them lightweight Mickey Perez, welterweight Danny Garcia and middleweight Danny Jacobs. The natural showman used the occasion to announce the signing of world champion junior welterweight Paulie “Magic Man” Malignaggi, who trains out of Gleason’s and is a hometown favorite.

A bit of logrolling was indulged, as is often the case at these events, with a shout-out to Melvina Lathan, Chair of the New York State Athletic Commission; opening remarks by Barry Baum, the Vice-President of Communications at Brooklyn Sports & Entertainment, the sales and marketing arm of the Barclays Center, and Richard Schaefer, the CEO of Golden Boy Promotions; and even a surprise appearance by controversial Atlantic Yards developer Bruce C. Ratner.

De La Hoya, dressed casual-but-chic, in blue jeans, a tattersall checkered shirt and heather wool blazer, his face fuller and hair longer, looked like the very incarnation of an athlete-cum-businessman, still boyishly handsome, disarming and sleek. His platitudes about bringing big-time professional boxing back to Brooklyn, “starting now, with the kids that train at Gleason’s,” went down easily. We nodded in agreement when he claimed, “Brooklyn deserves it.”

Backing up his promise to be a role model to the amateurs of USA Boxing Metro,
Oscar held a clinic in one of Gleason’s three boxing rings, but not before a photo opportunity that had the Golden Boy swarmed with photographers and fans thrusting gloves up for him to sign. The jockeying for position was so intense that de la Hoya was muscled some 12 feet back from the podium, pinned against the ring where the clinic was scheduled. (I had a fleeting thought that the situation called for bodyguards, then remembered the champ--the first boxer in history to win world titles in six different weight divisions-- would have no problem defending himself should things get rough.)

There were plenty of us not part of the news media or avid fan base, milling around Gleason’s vast 14,000-square-foot floor: the regular gym rats, sporting thick gold chains and crosses, buzz cuts inlaid with lightning or yin/yang designs. Some came to train, dancing in the ring or punching heavy bags, seemingly oblivious to the hubbub around them. The din was punctuated by grunts and the slamming of bodies in the wrestling arena. Roaming like jackals were suited white guys with too much hair product--promoters, managers, publicity flacks—slapping their fighters on the arm, holding up an index finger (the universal sign for “We’re No. 1”) and delivering, a bit too self-consciously, the soul handshake. The women not working were all over-dressed, wedged into sausage casings and tottering on too-high heels. This also seems part of the fight game.

Soon paper barricades were ripped off and the center ring was crowded with a dozen USA Boxing Metro teenagers, all shadowboxing, cocky and sweet and twitchy with nerves. I clamored up on the ring apron and my eye went to the two lone girls, both sporting Gleason’s T-shirts, ponytails and braces; the flashier of the two chosen by the Golden Boy to throw punches at his upraised hands, his eyes twinkling in delight.

De la Hoya alternated correcting the stances of his young acolytes with flashing a dimpled smile towards the cameras, his attention divided between duties as trainer and spokesman. He pulled no punches when it came to exploiting his matinee-idol good looks and charm. The media pressed together on the ring apron, leaning in for a better view; the kids prancing, pivoting, throwing double and triple jabs, bobbing and weaving, their shoulders shrugging like real contenders.

One dad thrust his two-year-old son into the arms of the former champ; the cameras flashed and whirled. De la Hoya held the boy’s tiny fist and waved it for the press. The baby, his Mets cap half-obscuring his face, looked dazed and confused, unaware of the great man’s stature in this boxing mecca.

On my way out, I shook hands with Jack Hirsch, President of the Boxing Writers of America, in conversation with Bruce Silverglade, Gleason’s owner. Bruce allowed that the deal between Golden Boy Promotions and Brooklyn Sports & Entertainment would be good for boxing in Brooklyn and in New York in general, inspiring other promoters like Lou DiBella and Joe DeGuardia to put on more fights.

I clomped down the two flights of stairs, happy to feel the cool night breeze. There on the sidewalk before me was Bert Sugar, boxing writer, editor and sports historian, biting on his signature cigar under a wide-brimmed fedora, and by whose very presence blessed the event, a true Pope of the Fistic Science.
Posted by Hank Kaplan Archive at 6:34 AM